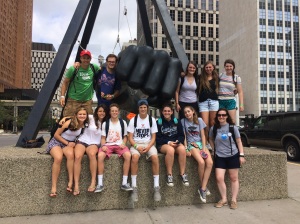 If you aren’t familiar with the Ask Her More campaign, it’s a movement during Hollywood awards season that urges reporters to ask women about more than just their dresses and makeup. For the record, I am all for this—these women are capable of talking about a lot more than just fashion and their relationships.

That’s where I got the idea for the name of this entry: Ask Them More. A group of twelve of us from St. Paul’s returned last week from the ELCA’s National Youth Gathering in Detroit. While I haven’t been asked too much about the fashion in Detroit (there was a lot of neon), there has been one very popular question: “Did you have fun?” I can imagine that the other members of my group are having similar experiences.

Don’t get me wrong—I appreciate the question. At its heart, it’s an earnest desire on the part of the asker to hear about our experiences. And—surprise—we did have fun! We had a blast! St. Paul’s has an awesome group of young people, and we did a ton of fun things. There was singing and dancing, sports and painting, lip-syncs and selfies. We came up with mottos, watched cheese get lit on fire, and played a ton of card games together. We had a lot of fun!

But when asked if we had fun, or its cousin the sarcastic “So you survived?” I always find myself giving a one or two word response. It’s not that I don’t want to talk about our experiences, I really do. It’s just that they were so much more than fun, and that’s hard to put into words sometimes.

If our goal was to have fun, believe me, we could have done that with a lot less fundraising and planning. If we just wanted to have fun, we could have taken the youth to Dorney Park and called it a day. But we spent months getting ready, raising money, and learning about how we would encounter God in Detroit. Because we were after more than fun.

Our youth engaged their faith deeply on this trip. They asked insightful questions, gave thoughtful answers at our daily devotions. I watched them talk to Detroit residents, and take seriously what they were hearing. They couldn’t wait to do our service project, and refused to do less than their absolute best.

I can’t wait to tell people—especially the people at St. Paul’s, who made it possible for us to go—about all o

f these experiences and more. But what I really can’t wait for is for the youth to tell their stories to you. Because believe me, their perspectives are going to be much more interesting than mine. We’re going to find a way for them to share those perspectives with the whole church. But in the meantime, ask them! Ask them if they had fun, but ask them more, too.

Ask them what their most meaningful experience was? Who was their favorite speaker? What surprised them about Detroit? Does the Gathering make them want to do anything new this year? Ask them. You won’t be disappointed.

Hi Everbody!
I'm the associate pastor at St. Paul's Lutheran, in Ardmore, PA. I'll be using this site to post sermons, devotions, and reflections on ministry. Thanks for reading!